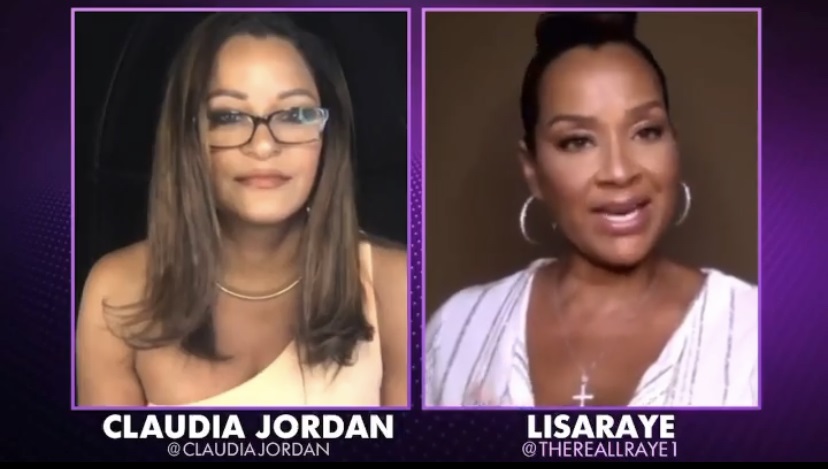 Pretty soon it’ll be 15 years since the Nicki Minaj/Lil Kim debate began. We’ve gone from Lil Kim telling Nicki Minaj “pay me homage” to Nicki calling her a Raggedy Ann doll to album covers beheading each other and finally Kim asking that people stop comparing the two. But of course this is quarantine and people have jungle rot of the brain and they forgot about that. And what better time to sh*t start than when you’re locked in the house with nothing else to do? The Mayor of New York City just told us today he would have people physically removed from the water if they try and swim so Twitter it is for now.

This week Usher was told by Swizz Beatz that interest in a Nicki Minaj and Lil Kim Versuz battle had been brewing. Usher said that would never work because Nicki was a byproduct of Kim. Before he could finish his thought he was informed he was already trending on Twitter. In a conversation with TS Madison, Tamar Braxton said she disagrees and said “I don’t give a damn, what come, what may, Lil Kim did not give Nicki Minaj her talent. So, therefore, who are you to take Nicki Minaj talents away from her?… You can’t get too involved with the Barbz or the Queen Bees, I don’t know the stans, but you can’t get too involved with it because that’s not fair.” She went on to say that those who keep these comparisons going are only trying to “discredit [Nicki’s] talent.”

LisaRaye McCoy spoke to Claudia Jordan on her FoxSoul show and started out praising Lil Kim. And while Claudia said that Usher meant no disrespect to Kim, standing her ground, LisaRaye said “We can all stand together queens and we can all say that all of us are acknowledging the fact that Kim came before Nicki Minaj.” She continued saying, “So Nicki, just take a seat. You don’t have to sit down for long, but just take a bow. Just like Beyoncé said, ‘Bow down b*tches.”

Now telling a woman to sit down or anyone for that matter is serious. Those are almost fighting words. And the “bow down b*tches” line? Does she not know how Nicki will take her entire show and rip the heads off of her and everyone who tweeted a “Yaas Queen” in agreement because she can? The internet of course had an opinion about what LisaRaye said and it was hardly nice.

Hopefully those two don’t start beefing again. They’re both insanely talented in their own regards. Did Nicki find influence in Lil Kim? Yes, she did. And that’s a fact whether she acknowledged it or not, which she has. As for the bow down b*tch comment from LisaRaye? We probably could have done without that. But she just did an interview talking about her habit of not marrying for love so she probably needs to work on that since she’s still talking about what ended her last marriage over a decade ago. Lil Kim’s been focused on keeping her house and Nicki Minaj’ sex offender husband, we’re not sure if they’re together now or not but as you can see, they’re all too busy to be dealing with this. Well, maybe not Nicki. She’s in the middle of a fake industry break so she might pop a line or two out of boredom. We’ll see.

#PressPlay: #Roommates, the ladies of #FoxSoul also gave their opinions on the #LilKim & #NickiMinaj debate that initially started from a conversation between #Usher and #SwizzBeatz. 🎥: (@foxsoul)

Who is telling da baby to bow down to Tupac? Tory Lanez to move around for Jay Z? Gunna to sit down for biggie? We don’t get these things. But Nicki Minaj should kiss lil Kim’s ass time & time again when sis said Kim was a legend. Lisa Raye seemed to be reaching to me.

Lisa Raye is getting roasted for speaking the truth…and black women wonder why no one searches for them pic.twitter.com/nnAnseHalE

Lisa Raye wants Nicki Minaj to bow down, well here you go. Nicki did bow down when she met the Queen who set the bar before her. So, Nicki knows when and who to bow down to. Nicki also knows when it’s time to Raah, Raah like a dungeon dragon. #hiphop #femalerap pic.twitter.com/hGXuzQLg7F

I think Lisa Raye, and anybody else who feels Nicki owes Lil Kim anything in 2020, is fucking stupid. Then to say Kim came out at a time with all dudes as if Nicki Minaj hasn’t been running shit amongst dudes for 11 years, now, and 109 chart entries later. GET OUT!

Wtf is LisaRaye straight to DVD ass talking about? “Take a seat” for what? And don’t get me started on can’t keep a show Claudia. https://t.co/uG5vwvuG25